On 11/28/22, an awards presentation ceremony was held honoring Police and EMS personnel for some noteworthy achievements.  On the police side of the house, the following officers received life saving awards:  Officer Shiley, Officer Rennie, Officer Boldosser (x2), Cpl Read, Cpl Curtis, Officer Lewis, Lieutenant Foltz, Officer Milletics, Officer Fitzkee, and Officer Kell.  The awards included several CPR saves and one suicidal person rescued from a hanging attempt.  Additionally, Officers Fitzkee and Stirling received a unit citation for capturing a burglar who subsequently confessed to multiple other crimes in the area, and Officer Cramer, who was the principal investigator in the solving of a shooting incident.

These awards represent but a fraction of the outstanding achievements of our staff, day-in, and day-out.  Many of the recipients are pictured here, along with EMS personnel who were honored at the same event, and commissioners and staff. 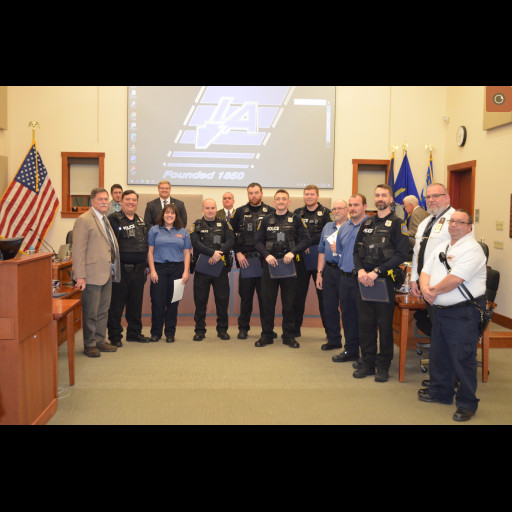